Tariffs Are a 19th Century Solution

Trade wars are good, and easy to win. ~ Donald the Mad

I guess we should be happy that Trump is bored with starting a nuclear war with North Korea. Now he wants to start a global trade war.
When George Bush imposed tariffs on imported steel in 2002, the goal was to save steel jobs and help Republicans in Ohio and Pennsylvania. The result was that more people lost their jobs as a result of the higher steel prices than were employed in the entire steel industry.

There were steel shortages as the US steel industry was unable to meet domestic demand. The US trade deficit actually increased because the cost of finished products, like automobiles, rose in the US making imported cars more attractive. Facing retaliatory tariffs from a united international trading system targeted to punish Republicans in Florida and Michigan, Bush withdrew his tariffs in less than a year.

A Brief Tariff History
Tariffs were a common tool used 150 years ago to protect domestic industries from more powerful manufacturing nations like England and Germany. Whether they worked or not then is problematic; the Gilded Age was great for the mega-wealthy but coincided with the Long Depression with high unemployment and extreme poverty for the working classes. 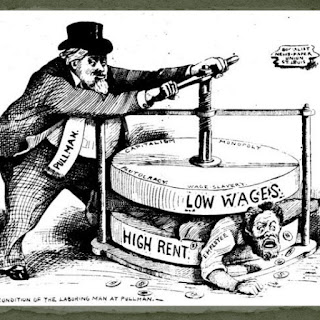 If you were steel magnate Andrew Carnegie, tariffs made life better than good; if you were employed by him life sucked and you worked until you died.

The most famous tariffs were the Smoot-Hawley Act during the Great Depression. They didn't cause the depression but they made it worst. Our tariffs and the retaliations slowed international trade to a crawl, isolating nations into individual islands of misery.
Posted by knighterrant at 1:00 PM