Back into the Maelstrom

I've spent the last two weeks as an election refugee in England. I wasn't completely unaware of news from the States (damn you free hotel wifi) but I didn't drown in campaign sewage. 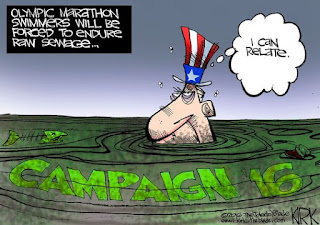 I met a splendid couple from Shanghai in the English Lake District who had been following the US news for months with a mixture of amusement and apprehension. They had many questions about American elections which I answered happily until they asked me about Donald Trump. I answered that he is insane and scary.

The most memorable encounter was with a Mexican student traveling Europe I met on a train headed north out of London. He was well versed in the American election and we spent a couple hours discussing it and other topics. As I was debarking this young man looked at me and said in a compassionate and reassuring voice, "Don't worry, Trump won't win."

I think he won't but I will stop worrying on November 9th.
Posted by knighterrant at 10:23 AM