If I were Hillary I would wait until after the Republican Convention to announce my Veep choice on the off chance the rebels execute a coup and dump Trump and I'd need to rethink my strategy. Still, everybody else is talking about it, so...

Democrats
I love Elizabeth Warren and really, really like Cory Booker. Both would make excellent picks. Liz is the better campaigner, especially her ability to throw Trump off his game and make him spend an entire news cycle mumbling "Pocahontas." Booker is younger and oozes charisma. The downside for both is that they are senators from states with Republican governors meaning gaining control of the Senate would become more difficult.

Kaine is the establishment pick. He is so establishment he has "Beltway Insider" tattooed on his chest in inch high gangsta font. In a time where establishment insiders are held in contempt and Hillary already fills the insider niche, Kaine would signal to both Bernie supporters and independent voters that their voices would not be heard. 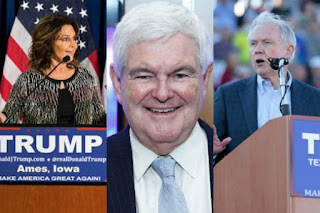 The question for Trump is not who he will pick but who won't say "no." The list of people who've said "don't even ask" to Trump is huge. Of those left, you've got the unemployed con artists (Sarah Palin, Newt Gingrich, Rick Perry) who desperately need a job, the embarrassing sycophants (Chris Christie, Ben Carson) who have been demeaning themselves before the great Trump butt, and a small Trumpish handful of officeholders who seem willing to be Trump's fourth wife (Jeff Sessions, Mary Fallin, Bob Corker).

At this point my best guess is Liz Warren and Sessions but I wouldn't wager a farthing on the subject.
Posted by knighterrant at 11:23 AM