The (NY) State of the Nominations 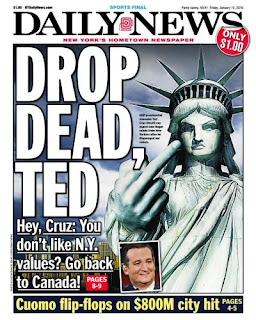 It's Hillary. It's not Cruz.

Bernie Sanders went all in on New York, spending a shit ton of money and predicting victory. He lost in a landslide. Ted Cruz wasted every second he spent in the state; not just finishing third but a pathetic third. In one congressional district (the 16th) Cruz managed the impossible, finishing fourth in a three man race (Ben Carson got more votes).

I will still vote for Sanders on June 7 but, short of Hillary defecting to ISIS next month, I don't see any way for Bernie to top Hillary in pledged delegates or votes cast. This means he is reduced to convincing the establishment (super delegates) to abandon the establishment candidate. Ain't gonna happen.

As for Cruz, he is mathematically eliminated from a first ballot victory. His only hope is to finagle enough delegates through underhanded maneuvers to steal them from Trump for a second ballot coup.

Democratic Convention
This will be a Hillary coronation. The only way she can screw up this Hillabration is trying to punish Bernie by denying him a prime-time speaking slot. It would be an inanely stupid thing to do but politicians can be petty and vindictive animals.

Republican Convention
Donald Trump will not get enough pledged delegates to insure a first ballot victory. He will need some number of unbound delegates to put him over the top. I put the odds of one chance in three that he will get enough of the unbounds to pledge before the convention to turn it into a Trump coronation.

Trump's only chance at the nomination is on the first ballot. After that first ballot his delegates will melt away faster than a tropical iceberg. Ted Cruz's only hope is a second ballot victory. If all his machinations to snag Trump pledged delegates fail to get him to the magic number the convention won't give the most hated man in the Republican Party another shot. At that point expect Paul (The lady doth protest too much) Ryan to be dragged kicking and screaming to the crown, figure it to be around ballot six. 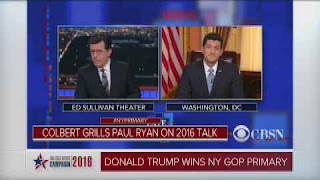 Posted by knighterrant at 12:21 PM