The Rage of Xenophobic Nativists

On May 15, 1972, I was talking to a college professor about the news that someone, then unknown to us, had attempted to assassinate segregationist presidential candidate George Wallace. She said that she prayed the shooter wasn't black because the backlash against all African-Americans and the civil rights movement would be devastating. Wallace at the time was running second to George McGovern in the Democratic primary race.

Fortunately, the shooter was a whiter than white lunatic named Arthur Bremer who had wanted to kill someone to prove his questionable manhood.

There will be no such check following San Bernadino on the rage of xenophobic nativists being fueled by the hate rhetoric of the leaders of the Republican presidential race. I've noticed two things while browsing right-wing opinion. 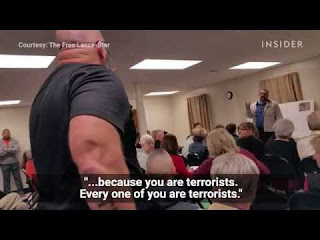 Collective Guilt - There is a growing belief that all Muslims are guilty of the acts of two individuals. Anti-Muslim hate crimes have skyrocketed in Europe since the Paris attacks and will blossom like an obscene flower in the US. 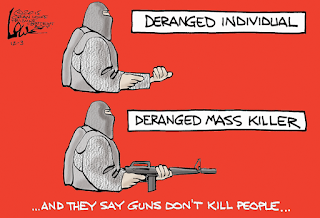 Guns Are an "Inalienable Right" - Any effort to keep military style weapons out of the hands of potential extremists will be opposed by the NRA and by the same people who would force all Muslims to register themselves. AR-15s are being spoken of with a holy reverence that I have never heard before. Semi-automatic weapons have reached the level of religious sacraments for many Americans who worship guns now before God.

Trump and Cruz will likely see another bump in their poll numbers in the coming days. Harassment of women wearing hijabs will increase. Bomb and death threats against mosques and Muslims have already spiked. Actual physical attacks will probably follow. If we are lucky we will not see actual pogroms in Muslim communities but that is possible in states like Texas where gun worshiping nativists abound.
Posted by knighterrant at 12:57 PM