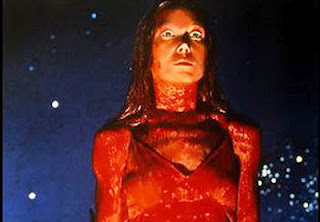 This is a tricky subject because the sum of the Blood Libel against Jews is the false charge they use the blood on innocents in Passover ceremonies. Still, there are a couple of "civilized" religions that embrace the concept of blood sacrifice.

Evangelicals
Specifically the "Dispensationalists" who believe the Rapture, the Anti-Christ, and the Great Tribulation are all in the near future. In other words, 41% of all Americans. Dispensationalists believe that with the Second Coming will come the return of all the ancient temple ceremonies listed in Leviticus including animal sacrifice.


Suppose you found your brother in bed with your wife and put a javelin through both of them, you would be justified, and they would atone for their sins. ~ Brigham Young, 1856

The notion of "Blood Atonement" was a staple of the early Mormon Church. God could forgive certain sins only by killing of the sinner in such a way his blood falls upon the ground. Both Joseph Smith and Brigham Young (Danites or Avenging Angels) had gangs who would hurry men to their salvation by murdering them. Modern Mormons claim such stories are myths. The concept of Blood Atonement survives within polygamist Mormon sects. 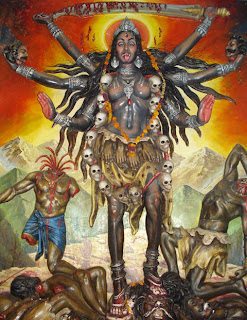 In researching this I was surprised to discover that there was an element of truth in the movie "Indiana Jones and the Temple of Doom." The 5000 year old cult to the goddess Kali is not dead and results in the occasional human sacrifice in India. Whether it is just an excuse for mental illness or actual religious fervor is for you to decide.
Posted by knighterrant at 10:34 AM