If you don't believe that global climate change is real, explain this video.

The Aral Sea was once the fourth largest saline lake on earth. As late as 1960 it was larger than Lake Huron and supported a vibrant fishing industry. Today, it is a handful of puddles that are, combined, less than one-tenth its former size. 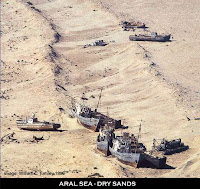 An entire fleet of modern fishing boats rests stranded on its salty dunes. Even if they could be floated the remaining water is so salty that most of the remaining lakes are dead. Winds blowing across the dry salt flats kick up poisonous dust storms.

Want fresh water? Try Lake Chad. As large as Lake Erie in 1960, it is now the size of Lake Champlain. Shallow, with an average depth of less than five feet, by volume there is less water in Lake Chad than Roosevelt Lake behind the Grand Coulee Dam. 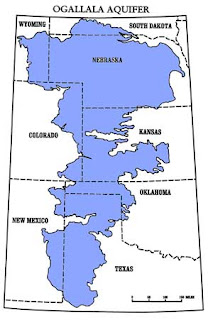 "Yeah, but," you say, "them is foreign countries. The Good Ole USA is just fine." For you, I have the Ogallala Aquifer. A huge underground lake that ranges from South Dakota to Texas, it held over 3 billion acre-feet of water before we began seriously tapping it in the 1950's. That's 100 times the capacity of Lake Mead. It supplies water and irrigation for the citizens of eight states.

So much water is being drawn from the aquifer that the groundwater levels are dropping as much as five feet a year. It would take 6,000 years for the aquifer to refill if fully drained. It is being drained at the rate of 18 Colorado Rivers a year. Billionaire T. Boone Pickens plans to accelerate that draw down by pumping water to sell to Texas cities like Dallas.

It may take 25 years, it may take 50 years, farmers hope they can conserve enough water to make the aquifer's life stretch for 125 years. Cut those numbers if Picken's plan takes off. But, the aquifer is doomed. It is only a matter of time before the greatest underground reservoir in the United States is dry. And America's great agricultural heartland will dry up with it.
Posted by knighterrant at 2:35 PM