Now the Neo-Cons Have Gone Too Far

Dr. Aaron Shutt: Lay off my wife, will ya?
Dr. Jeffrey Geiger: She's not your wife, she's your significant ex-other. If she were really your wife, she'd be creaming you for alimony.
~ Chicago Hope 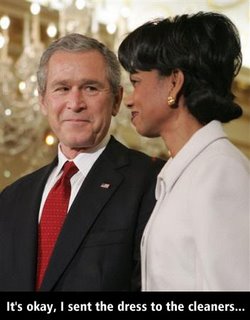 All Hell is about to break loose on the Republican Right. It's one thing for Rush Limbaugh and/or William F. Buckley to hint that George Bush is not the bestest of Republicans. Now, the Neo-cons are taking direct aim at Georgie's almost wife. From Insight, Newt Gingrich and Richard Pearle are two of the leading lights from the Dark Side that are openly calling for Condi Rice to be fired.

They are showing some compassion for the swirl going on, they only want her transferred to an "advisory position." Although I am curious what positions the thrice married Gingrich would advise her to advise in. Bush is renown for his loyality to people he hasn't rubbed groins with. He will fight for Condi like a (EDIT: find a synonym for the tiny plaything of a tigeress).

I really hope the movement to fire Condi gains traction. The aftermath will be fun. Photo from The Sideshow.

tags: condi rice, Bush
Posted by knighterrant at 7:59 AM

Whew!
Another bullet ducked. There have been only three ways the Republicans can hold the Presidency in 2008. One is if they get the hackable electronic voting machines in place despite the fact that people are waking up to that danger.
The second is if the Democrats nominate Hilary -- who might make a good President, but who is so hated that she will raise Republican voter participation 10% and unite them behind which ever of their absurd candidates they nominate.
The third was if the Republicans nominated Condi. (Especially if Cheney resigned and she was appointed to take his place.) (And she might not be as much of a disaster as the other candidates they might nominate. She'd certainly be better than Brownback, Frist, Huckabee or Gingrich. Or that master of pretending to be a maverick, McCain *ptui*)