'Kill and Scalp All, Big and Little; Nits Make Lice' 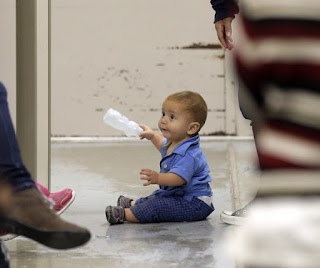 When Donald Trump sees this mestizo toddler he sees a murderer, an animal who must be caged from the earliest moments of his life to protect good, decent, white Americans. Trump believes that all Mexican children are potential murderers and rapists.

The quote in the title is the justification used by Col. John Chivington in 1864 to explain his order to merciless slaughter and mutilation 105 women and children at a Native American village in Colorado Territory. An event known to history as the Sand Creek Massacre.
Posted by knighterrant at 1:46 PM

The quotation seems appropriate. I want you to see this letter: SHI President Rosita Worl submitted the following letter-to-the editor on the appalling practice of separating children from their families at the U.S. border:


I want to express my appreciation to U.S. Senator Lisa Murkowski of Alaska for opposing the separation of families at the U.S. border and demanding an immediate halt to this “cruel, tragic” practice. I also want to recognize U.S. Senator Dan Sullivan of Alaska for requesting a more deliberate bipartisan approach to this issue.

For me and for many, many other Alaska Natives, this issue is personal and resurrects old wounds. As Alaska Natives, we suffered the kidnapping of our children who were interned in boarding schools under the assimilationist policy of the United States. We as individuals and societies continue to suffer the intergenerational trauma from being separated from our families and raised in boarding schools.

When I was six, a missionary kidnapped me in Petersburg and took me to an orphanage in Haines, where I was kept for three years apart from my family. I know first-hand the despair felt by children longing for their loved ones and the terror of being a child alone. I feel my heart breaking all over again when I see children at the border suffering the same trauma today. It breaks my heart to hear their cries.

To the Trump administration, we implore you, we plead with you, to act immediately to stop this barbaric, inhumane act of separating children from their parents and guardians at the border. This practice is morally reprehensible and will become a repeat of previous horrific American Indian policies and practices to eradicate Native cultures. We are proud to be Americans, but this practice does not represent American values and ethics.