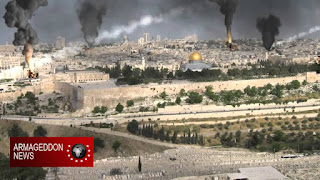 For evangelical Christians peace in the Middle East is abhorrent. They want war there and not a little war, they lust for a war of annihilation in Israel where the blood will flow a meter deep. They want the Muslim world so enraged at Israel that they will band together a massive invasion army. They want to bring about the Battle of Armageddon. They expect this war to kills two-thirds of the Jews in Israel with the survivors converted to Christianity. They foresee Jerusalem reduced to rubble to be rebuilt by a returning Jesus.


After the war they foresee the mass genocide of unbelievers so that only Christians will remain alive. Many believe that only the members of their particular Protestant sect will survive the culling.

This is the only thing evangelical Christians want for Christmas. I'm not saying Trump believes this shit, he believes nothing that doesn't have a dollar sign attached, but it is what Radical Republicans expect will be the result of Trump moving the US embassy to Jerusalem.
Posted by knighterrant at 11:19 AM

What do they think this is, the time of the Crusades? Are these Bible-banging nitwits unaware that Israel has 200 thermonuclear weapons and zero tolerance for suffering through any further episodes of genocide for the sake of Christian/fascist delusions?

Most of the Muslim Middle East is getting pretty economically developed and has too much to lose to start a war that would immediately turn nuclear. Fortunately most of them aren't as irrational and bloodthirsty as our evangelicals apparently are.