Trump Is the Useful Fool

"Useful fool" is a Russian idiom attributed to another Vladimir, Lenin. It describing someone easily conned into supporting Russian initiatives that the fool does not understand and are designed to destroy the fool. In English it is often translated as 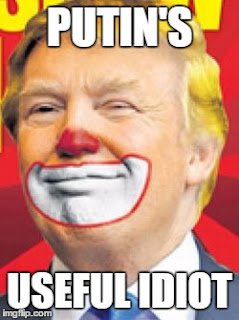 The result was best described by Lenin when he allegedly said, "The last capitalist we hang shall be the one who sold us the rope."

It seems all it took to turn future president Trump into Putin's bitch was a little gratuitous praise. Once he had bitchified Trump, Putin set about inserting his propaganda into the US election thus influencing the gullible, or "useful innocents."

"Useful innocents" is another phrase from the 20th century Cold War. They are naive people easily confused by propaganda who are convinced to vote against their own democracies.

One final quote, this time an observation by Mark Twain that explains the mess we find ourselves in.


Ain't we got all the fools in town on our side? And ain't that a majority in any town?

Posted by knighterrant at 12:43 PM