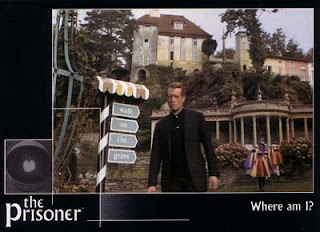 AMC is producing a re-imagining of the classic 1960's British television series, The Prisoner. I gave it a try on the theory that even if it was only half as good as the original it would still be great. I was wrong.

This reimagined version, which feels a bit old hat in a post-Matrix fantasy landscape, is more leaden, pretentious and solemn, a tone embodied by Caviezel’s brooding Six, who’s more dour than dashing. ~ Matt Roush at TVGuide

The remake is a pale, mono-chromatic ghost of the vibrant original. This new Six doesn't know he is a prisoner, he just sort of maybe thinks he might be. There is no rage against his captors, just a confused peevishness. The original was surreal (fantastic imagery and incongruous juxtapositions) while this remake is pedestrian (lacking wit or imagination). I wasn't alone in hating the remake. The ratings tanked by two-thirds from the first episode to the second.

I didn't watch the whole thing but I did skip to the ending (I hunted down a spoiler on the Internet) where I could find the premise. It wasn't worth the hunt. Basically, everyone is stuck in the dreams of some woman named Mrs. Curtis. Oh, and there is a Fortune 500 company involved.

What's strange is that the premise of the original is just as current as it was 40 years ago. Extraordinary rendition to an island paradise where your identity is taken away, you are occasionally tortured, and you can never, ever escape. Sounds a hell of a lot like Gitmo, doesn't it?

The original series made the Hotel Portmeirion in Wales a destination vacation site even now. I doubt the remake will make the Namibian resort of Swakopmund any money at all.
Posted by knighterrant at 12:58 PM

I saw less than 5 minutes before I reached this conclusion. It misses the entire point of the original show, and does a poor jb at the same time.