A Penny for Your Loafer

Throwing Shoes
Remember how we learned shortly after Baghdad fell that hitting someone with a shoe is a major insult among Arabs. It is like flinging feces, it is a symbol of disrespect, of contempt. Below is film of an emotional Iraqi showing his hatred of Saddam Hussein in the worst way he could imagine.

Sabotage
Word Origin: Sabotage derives from the French word sabot, meaning wooden shoe. While the exact way that a wooden shoe came to describe an act of deliberate destruction is lost in the mists of etymology there is no escaping the fact that even in Europe/America a shoe is a bad thing.

Shoe Bomb
Where was the Secret Service? In the United States if you travel by airplane you have to remove your shoes lest your Florsheims blow up, destroying a 747. Yet, in Baghdad an Arab journalist was able to boldly sneak a pair of shoes into a press conference and heave them at President Bush. What if they exploded? From now on, George Bush's security force should require everyone coming into contact with Bush to be bare foot. Hell, they should be naked, someone could have a bra bomb.

Shoe Phone
Do you realize that the cell phone was invented by the television program, Get Smart in the 1960's? 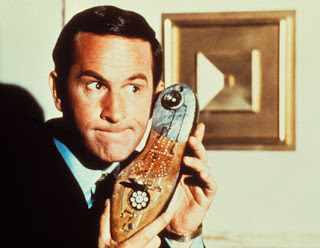 Posted by knighterrant at 5:54 AM