All Politics Is Local - Israeli Division

Polls and news reports suggest that Bibi Netanyahu may be suffering from the Eric Cantor disease. Bibi is concentrating entirely on outside matter like tweaking President Obama and campaigning before the American Congress. He gives off the impression he would rather be in the United States Senate than the Israeli Knesset and he is suffering in Israel for it.

Israeli politics is all about coalitions. Likud and Yisrael Beiteinu has 31 seats in the current Knesset and formed the foundation of a ruling coalition that held a bare majority (61 of 120) of seats. The latest polls give them only 25 seats. Their current coalition is projected at just 49 seats but Likud can expect another five seats from new parties. However, the Labor coalition will also fall short of a majority. Their existing coalition is also projected at 49 seats.

The wildcard is the new Kulanu party. Their interest is entirely local and domestic economic policies and polls say they could earn as many as ten seats in the new Knesset. They have flirted with both sides and there is no predicting where they will go. 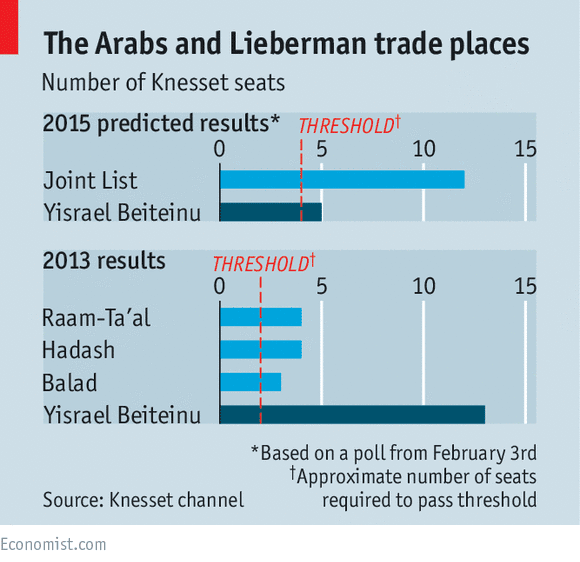 But the really wild wildcard is the Joint List. These are the Arab parties and polls suggest they will win 12 or 13 seats. They will never ally with the racists in Likud but they probably would not officially join a Labor coalition.

Then there is Netanyah's current "come home to Likud" strategy telling voters to abandon the fringe parties in his coalition and vote for Likud. While it might boost Likud seats it could drop some of his partner parties below the 3.5% vote threshold required for any seats in the Knesset and alienate the others. It's the kind of selfish, cult of personality campaigning we've come to expect in American politics but I doubt it will be effective in an atmosphere that requires coalition building.

We shall see.
Posted by knighterrant at 11:57 AM