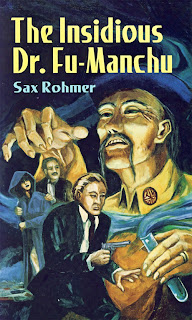 I'm surprised I didn't see this before. The current Islamophobia is just a revival of the 19th century Yellow Peril scare. Bin Laden is given the role of Fu Manchu, a strange looking evil genius whose insidious tentacles and countless minions threaten Western Civilization itself.


He has the backing of a political group whose wealth is enormous, and his mission in Europe is to PAVE THE WAY! Do you follow me? He is the advance-agent of a movement so epoch-making that not one Britisher, and not one American, in fifty thousand has ever dreamed of it. ~ Sax Rohmer

Of course, Muslims have replaced the Chinese. They have an odd religion and odd rituals. They look different. They are brutal and do not value human life. They will take our women. Hell, they even trade in opium. 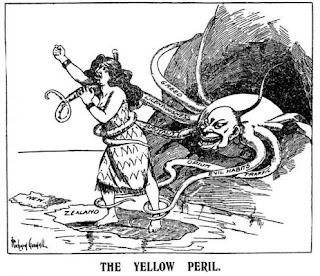 The larger forces at play in the developed world that have left Europe too enfeebled to resist its remorseless transformation into Eurabia and that call into question the future of much of the rest of the world. ~ Mark Steyn

It is all merely old-fashioned xenophobia, but it is remarkable how little the verbiage and imagery have changed in over a century. It is like some lazy bigot just stole all of the Yellow Peril rhetoric and recycled it.
Posted by knighterrant at 11:57 AM